Sadly, I had no time to work on my Summer Sew Geeky wardrobe plans.  Like, no time.  None.  It’s been a pretty hectic summer, with lots of travel (both expected and unexpected) and more commissioned projects than I’d planned on taking.  In fact, there are even a few projects from my Spring Sew Geeky plans that I’ve yet to make.  But, part of my original intent in this project was to focus on sewing items for the upcoming season, so I could get the maximum use out of my efforts.  Which means, realistically, it’s already time to turn my attentions to fall sewing.  I actually did most of my planning at the beginning of the year, so I’ve been looking forward to this fall collection since January.  While I’m sad my summer set never came to light, I can always shelve it for later (not like I won’t still have all the plans and patterns and fabrics), and move on to my next round.  As part of my Sew Geeky Challenge, I choose a fandom from which to draw inspiration, and use that to assist in my wardrobe planning.  For fall I simply had to choose SyFy’s hit show, The Magicians. 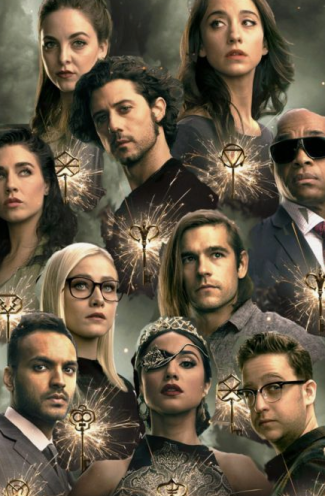 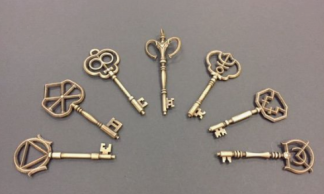 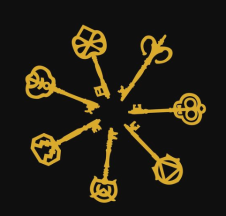 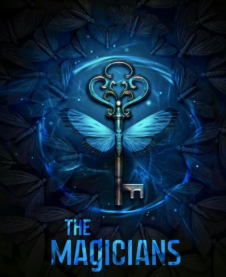 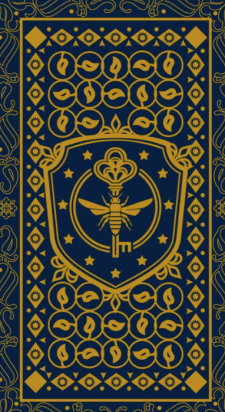 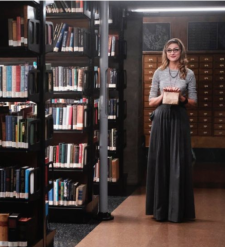 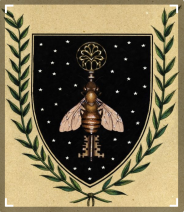 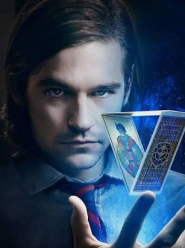 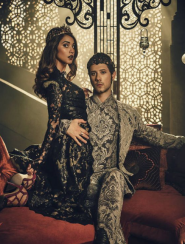 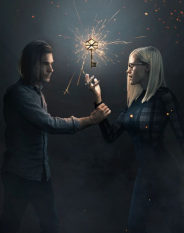 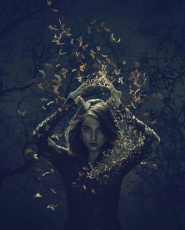 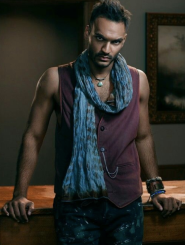 My first introduction to The Magicians was through Lev Grossman’s original novel, which I read as part of the Sword & Laser book club several years ago.  At the time, I wasn’t in love with the book.  To be honest, I had really mixed feelings, but I sort of knew at that time that I was never going to read the rest of the trilogy.  In hindsight, it’s not necessarily the sort of book one should read when they are feeling depressed, and the timing of it was probably really poor for me.

However, when SyFy launched The Magicians as a TV series in 2015, I happened to be at San Diego Comic-Con, in the room where it happened.  To be entirely fair, I’d really gone for the panel on the then upcoming release of SyFy’s (now Amazon’s) other show, The Expanse.  But while I was there, the cast and writers of The Magicians really sold the show to me, and, well, I had read the book, so I figured I’d check it out when it aired.  And you know, what?  It’s absolutely brilliant.  Definitely one of my favorite TV shows of all time.  I have become obsessed with the show, and I’ve pulled others in with me.  My sister was so obsessed she stole all of the books from my room and read them before I did (to be entirely fair, I am only halfway through the second book at this point).  I’m often in the camp of “the book was better” but I think this is one case where I’m confident standing in camp “the show is better.”  The sort of cool thing is, because of the complex magical background plot-i-ness of what’s going on, technically, both the books and the TV show, though different, can exist in the same universe, so nobody’s got to go to war over any of it.  We can all just love the whole big mess.

Anyway, bringing this back to the matter at hand, which is my own personal wardrobe planning, I felt like The Magicians offered the perfect inspiration for fall fashions – rich colors, intricate designs, and east coast/prep school sense of poshness, with some fun pops of Fillorian/Margot/Elliot royal color coming out.  I’m pretty obsessed with the costuming on the show – each character has such a defined look, and they all blend so seamlessly into the story, it’s pretty fantastic.  Rather than focusing on one character, though, I tried to distill a color story from the whole series: 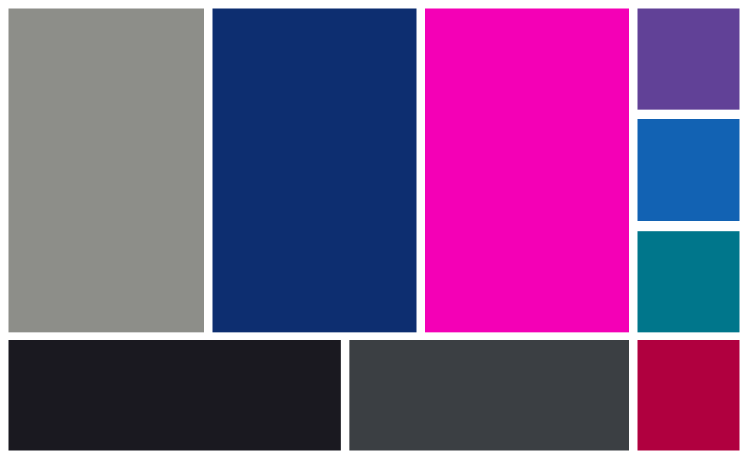 To me, the series is pretty dark, with lots of blacks, grays, and dark blues, but Margot’s character often adds a bright pop of color, and the royal clothes in Fillory add the jewel tones I’ve picked as accent colors.  Of course, part of this wardrobe planning project was to pick colors that came from my TCI and Prism XII True Winter palettes, so for those who have any interest, the colors are as follows:

For my sewing pattern choices, I’ve picked designs that I felt were a nice mix of the east-coast-prep-school Brakebills vibe, along with the fun whimsy of Fillory, and the sort of general feel or look of the costumes from many of the characters. 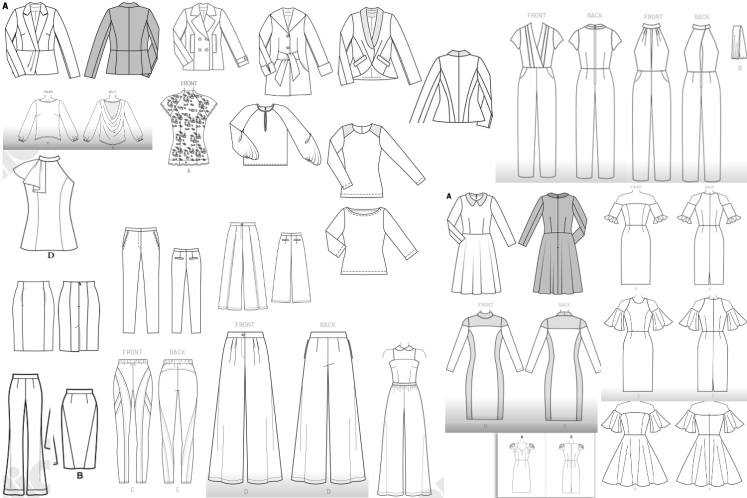 Now, obviously, I’m really not going to have time to make all of these.  But I do think there is a nice mix of tops, bottoms, outerwear, and party clothes, so I should have lots to pick from.  Also, not included in my line drawing composite above is this jacket from Patrones magazine:

I mean, realistically, do I need a coat like this?  Probably not.  But it is so Fillory!  Let’s be real, Elliot would totally rock that thing as the high king.  And I could use a nice coat to wear to holiday parties…

Anyway, I haven’t really narrowed down my choices as of yet, but there are certainly lots of great patterns that fit with my theme for fall.  I’m currently embarking on a fabric stash organization journey (inspired by Miss Celie’s Pants‘ Instagram chronicles of her pre-move remodel and major fabric organization and storage efforts), which should hopefully allow me to pull appropriate fabrics from the stash.  To be fair, some of these patterns have fabric waiting for them, and some would be well served by any of the beefy knits I tend to hoard from the Michael Levine Loft.  If/when I do start to pull fabrics, I’ll likely post such things on Instagram (don’t know that it needs a full blog post), so that’s something to be on the lookout for.  Of course, I do have a few commissions I’ll be working on in the meantime (it’s already started!), plus a few crafty projects that will require me to focus on my embroidery digitizing skills and not necessarily on these wardrobe plans.  Plus, I really, really need to finish up a few UFOs and make a few other non-wardrobe items which will be shared on the blog should I get around to them.

In any case, I can’t wait to get started on this collection.  It’s possibly the one I was most excited about when I started my planning at the beginning of the year, and it’s hard to believe it’s already fall.  I feel like I’m definitely learning things from this exercise of planning collections (especially what I may need to change or focus on for next year), even if I’m not as successful as I want to be in sewing all of the items in them.  I will say that the things I’ve sewn from my Spring collection have been getting a lot of wear (even the fancy party dress!), so in that sense I do think this idea of sewing in collections is very helpful for me.  I’ve still got some prep work to do, and lots of other projects that are going to be demanding my time, but with the Sewing Bee postponed until January (which means I won’t be able to participate next year), I’ve got all of National Sewing Month to go hard core in on these wardrobe plans, and I’m really looking forward to it!