Well, September has ended, and my sewing plans have been less fruitful than I’d hoped.  While I didn’t manage to complete a mini work appropriate wardrobe like I had hoped, I did manage to make a few of the pieces on my Fall Sew Geeky list, and have a few more in the works.  Although I can’t blame my lack of productivity on anything but my own lackluster efforts, I did get some unexpected commissions last month, and, more detrimental to my output, I got sick part way through the month (and, honestly, I’m still battling it a bit).  Summer was a lot of travel and a lot of stress, so I’m not surprised my body had a bit of a lapse in its immune defenses, but boy did it dent my productivity.

So, basically this means I’ve got three garments I still need to blog, because being sick really doesn’t motivate one to want to be taking photos.  So I guess we can all look forward to that?  I feel really behind on blogging – I’ve been sewing instead of blogging when I get the chance, but I feel I haven’t been doing as much of either this month.  My drafts have gotten to an all time high, but lack of photos is holding back more than a few of those posts.  September is usually super productive for me, so I’m a bit sad I’ve only managed 3 fairly simple garments, and about as many blog posts, but I will say I am very pleased with the new pattern I’ve tried, and I have set myself up for a higher output in October.

Looking ahead, I want to sew the trousers, skirt, and blazer I’d planned for the mini wardrobe contest, as well as some of the dresses on my original Sew Geeky fall plans list.  I’ve also been seriously wanting to finish my ever-UFO coat, and get it out of my sewing space and into my closet.  Seriously though, it’s been like two years.  It needs to get finished. 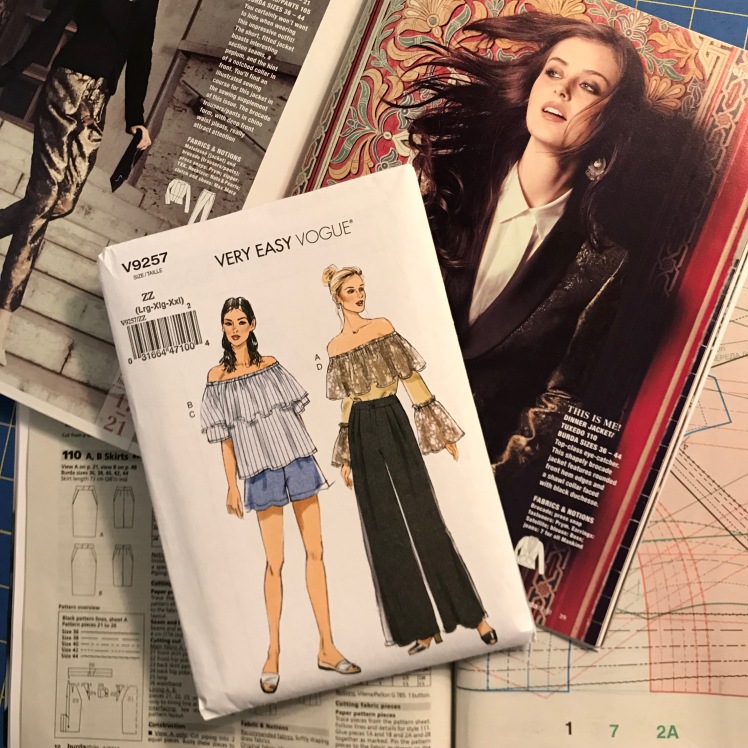 The one thing I did finish in September: the #sewphotohop on Instagram.  I was able to post every day, for each prompt.  I’ve never done a social media photo challenge before, so I have to say it was really fun, but surprisingly time consuming.  I’ve been pretty sparse in terms of social media postings this year, so I thought it would be a fun challenge to get back into it, and a fun way to celebrate national sewing month.  But I found myself wasting hours (hours!) looking at posts, or working to find something to post of my own.  I feel like I need to do a bit of a cleanse at this point.  I think social media is great, and it was really fun to feel like a part of the sewing community, but I also think it takes up a lot of time I could be spending on other things, like actually sewing.  Earlier this year I was challenging myself to stay off social media before noon – it was actually a really good system.  I’d get a lot done in the morning, and I wouldn’t be as likely to fall into a social media rabbit hole, but I’d still be fairly up on the happenings of the day.  I’m probably going to try to force myself back to that during October.  I’ve got a lot of studying to do, a lot of sewing to do, and I need to get myself back in shape after lying about my room for a week.  September is usually my most productive month, but it really wasn’t this year.  So October is going to have to be the month of productivity!

In a somewhat different vein, I haven’t posted a lot of Wardrobe Planning posts this year.  I feel like the past two years or so have been a lot of pondering, experiments, and “self discovery.”  Lacking energy to do much else while being sick (and finding a new YouTube channel) has sort of made me turn my thoughts back toward this topic of late. At this point in the year I feel that, although I haven’t been able to sew as much as I would like, I have some definite thoughts on the direction of my whole Sew Geeky Wardrobe Planning experiment.  I tend to ramble at length in my Wardrobe Planning posts, so I think my extended thoughts will be best contained in their own upcoming post, but I do think the start of this year’s experiment has given me a good sense of direction and clarity for what I’d like to be sewing in the future.  But, as I’ve said, that’s going to be a long ramble for a future day.  In the meantime, I’m going to get back to getting my energy up and working on my unfinished September sewing plans.

5 thoughts on “September Wrap Up and Looking Ahead”