This post has been sitting in my “Drafts” folder for years.  I wanted to write a review of the whole series, but I realized I was never going to finish this book series because it wasn’t good, and after reading Marie Kondo’s book about decluttering your life, I knew that spending time on the Divergent series would just be creating mental clutter. I thought about just deleting the draft, but I’m particularly biting my review, so I thought that it was worth posting, just for the amusement factor.  Thus, without further ado, here is the review of the first book, which I read several years ago, but never posted…. 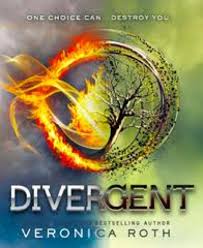 When I accidentally got sucked into watching the second half of the Divergent movie, I was inspired to read the books.  This was, unfortunately, not the best idea I’ve ever had.  Somehow the screenwriters managed to turn a vapid girl trapped in an illogical world into an exciting action adventure story.  Kudos to them.  Scenes that were emotional and exciting on film were awkwardly cringe-worthy on the page.  If I had a single electron for every time Tris “felt electricity” when she was close to Four I could power Manhattan for a week.  The world felt gritty and, well, at least plausible on screen – I never really accepted the whole society in the book.  Where are the adults?  Where are the old people?  Why are 18 year olds running things?  How do they get food?  It’s like a child’s perspective on what being a teen should be like, without actually dealing with any real issues.  It’s almost like the book uses being Divergent as an excuse for having fewer emotions – but, really, if they are supposed to be more human, shouldn’t they have more?  Shouldn’t things bother Tris more than they do?  This book touches on a lot of serious themes, but I can’t say I think they handled any of them well.  Too often the answer is violence or submission, neither of which have the lasting repercussions you would expect in a more realistic scenario.  Although my ebook has the entire series bundled together, I’m not sure when I’ll get around to finishing it – I think my time could be much better spent reading something else.