While fitting to a dressform can never replace fitting to a live person, when you sew for yourself it can be an invaluable tool.  I know when I first started I didn’t see the need for one, but after about a year of contortionist tricks and pin stabs, I was ready to find an alternative method.  I have nowhere near the budget for a custom built form, nor the weight stability to warrant that sort of a purchase.  I’m also not very close to industry standards for sizing, so I looked at my options for adjustable forms.  Different forms fit my needs at different times, so I thought I do a comparison/summary post of my findings.

Although I think it was a valuable experience to see my body form cast into another shape (hello, swayback!), this, ultimately, wasn’t the best solution for me.  I actually tossed this form, not finding a desire to bring it with me when I moved home from grad school.

Verdict: I’d make one to use for building cosplay armor, as I wouldn’t mind if it got messed up with the paints or thermoplastics, but I would look for an alternative if you just want something to use for sewing.  In the end, the cost of materials and time would be better saved to use on a higher priced dress form.

Ok, so I have to preface this by saying I’ve never actually owned one of these forms.  But, they are the most readily available and I’ve played with them in the craft stores, so I thought I’d best include them in the comparison. 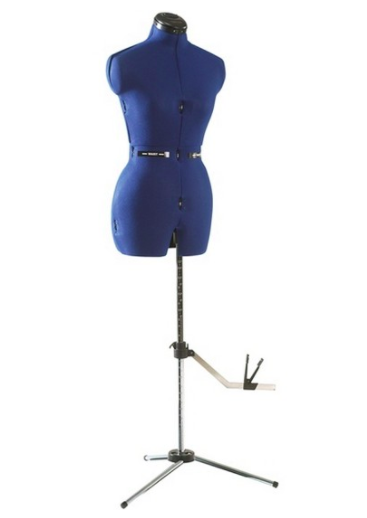 Verdict: I’ve avoided buying one of these forms because I’ve always rationalized that, for the money I could save up a little more to get something a bit better.  This is something I’d consider buying if I were going to get heavily into making cosplay armor though; for the cost it’d be comparable to the duct tape form and come with a stand.  If you need a form NOW then it could also be a good choice, as you can find them at Jo-Ann and other local craft stores quite frequently.

I bought one of these forms early in my sewing journey.  For the cost of around $150 (the prices have gone up somewhat), I figured it was a much better investment than the Dritz form from Jo-Ann.  In the changing landscape of sewing supply resources, turns out you can order them on Amazon now.  I was certainly much happier with this than the duct tape form, and I think it fits the needs of most sewers much better than a duct tape dummy would.  However, it isn’t a perfect solution to the dressform dilemma; there are certainly some drawbacks to this particular form.

Verdict: For the price point, this is actually a really good form.  I’ve enjoyed using mine, though I do wish the stand was a bit sturdier.  The original set up is a royal pain, but the end result is pretty good.  It is a Made in the USA product if that is important to you, and I didn’t have any problem with weird smells or fumes that other reviews may have reported.  At this point I’ve had the form for about 6-7 years; it’s yellowed quite a bit in that time, and the foam is significantly less squishy, but it has done its job or providing a great pinnable dress form that has, on the whole, been pretty comparable to my own body shape.  (Here’s another pretty good review that shows the steps for setup as well as the size ranges.)

I reached a point earlier this year where I realized I was no longer using my dressform as anything other than a glorified hanger because it no longer represented my body shape.  I was resigned to either fitting a new cover for the Uniquely You form (and, at the time possibly needing to order a larger sized form) or purchasing a different type of dress form altogether.  One of my main complaints was the inability to try leotards and pants on the form, as I wear a lot of these, and it was not possible with the shape of the Uniquely You.  So I thought I’d shop around a bit and see if I could find something that would suit my needs a bit better.  I was contemplating getting a professional form and padding it out to my measurements using batting, but then I stumbled on the Fabulous Fit system.  This system starts the user off with a base professional-ish quality form, then uses two layers of knit covers and many foamed pad inserts to replicate the shape of the body. 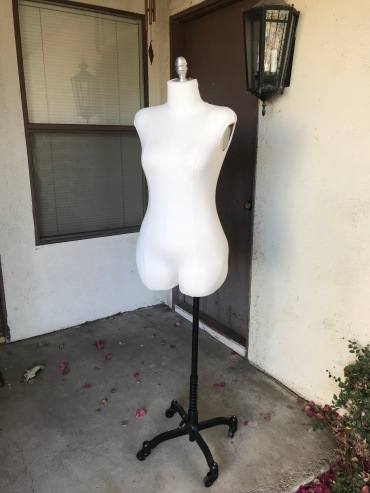 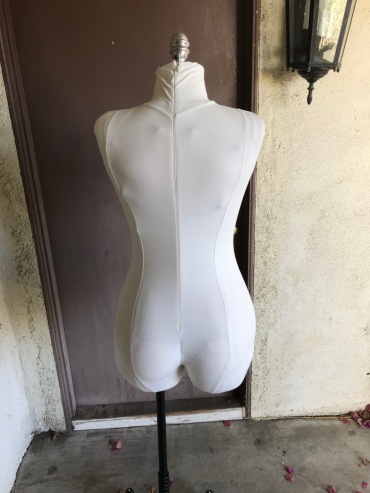 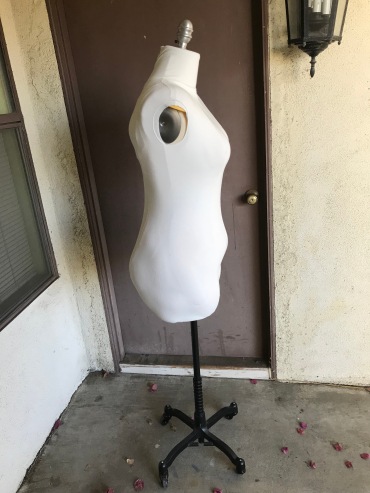 From the side it is easier to see the shape. 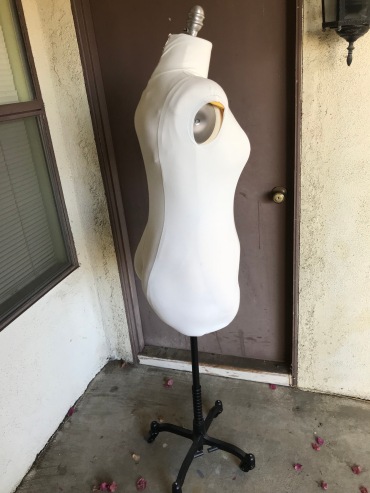 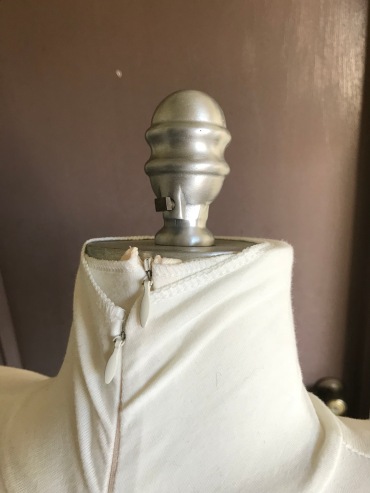 The neck seems to have a hook. 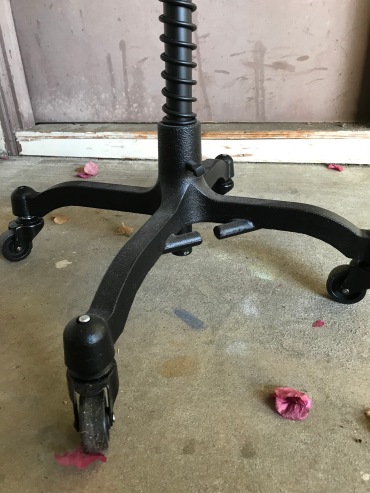 Verdict:  Definitely the best of everything I’ve tried, and well worth the money for the studio forms.  I love this dress form, and I’d definitely buy from this company again.  The men’s form and full-legged professional form are something of pipe dreams at this point; I don’t think I have either the space or income to justify them, and I am quite happy with what I do have.  But, it is nice to know the option is there should I ever decide I need to make the investment.

Here is a side-by-side rundown: 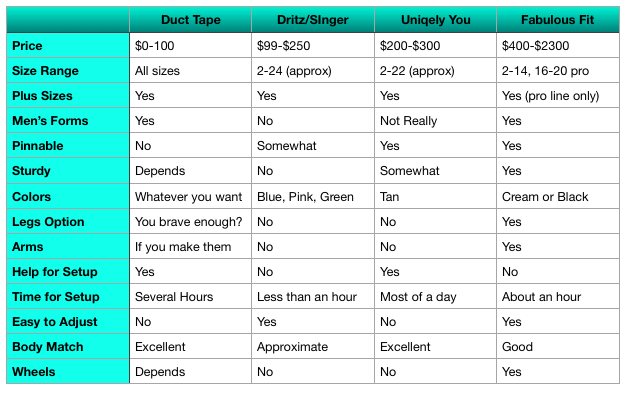 As my skills have improved, so has the quality of my dress form.  To be honest, when I first started sewing, I couldn’t have imagined spending $550 on a form, but the $200 price tag on the Uniquely You made more sense than buying the less-customizable Dritz or Singer models.  Of course, now that I have the Fabulous Fit, I find I much prefer it to the other options, and think it is definitely worth the money.  It certainly helped me fit my skating costume this past summer, which I couldn’t have done on my older form, which lacked the leg separations: 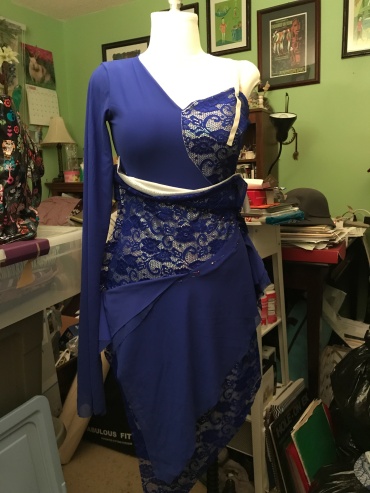 Half-finished dress form pinned together on my Fabulous Fit. 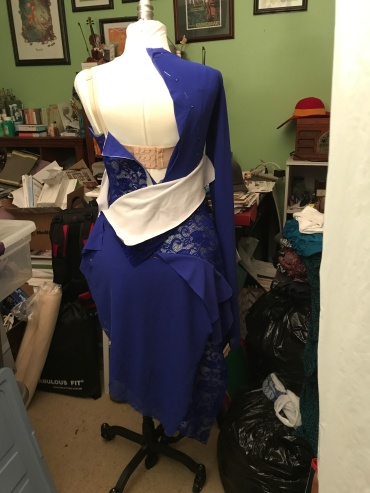 No, my sewing space did not get a make-over, I just wanted to use the good lighting.

Ultimately, if money were no object, the ideal would be to have a custom dress form made to measure.  However, since most of us live in a world of budgetary restraints, it is nice to know what other options exist.  Hopefully this run down has been helpful in weighing the pros and cons of several dress form options ranging from about $50-$600.  So, readers, time to ask – do you have any particularly positive or negative experiences with various dress form options?  Do you have a prefered brand or style?  What sort of budget would you set for dress form shopping?  If you have any helpful dress form tips, feel free to discuss them in the comments!