Ok, so I’ve gotten rather far behind in my book reviews, and I figure it’s about time to get caught up.  Since it has been several months, this review won’t be quite as fresh as they normally are, but an old review is better than no review.  So, the first book that my book club (Sword & Laser) chose for this year was The Sparrow by Mary Doria Russell. 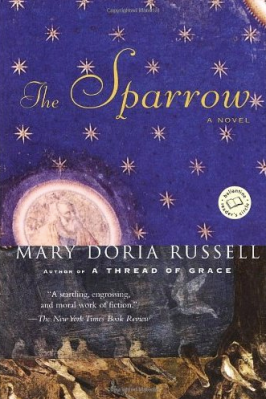 The Sparrow can pretty much be summed up as “Jesuits in SPAAAACE!”

Anyway, the premise of this story is that the human race detects a signal from a distant planet that clearly shows signs of intelligent life, and, being humans, decide they have to go stick their noses into the affairs of others.  Specifically, the Jesuits decide to make it their next great missionary project, and agree to foot the bill.  The story is set in the-not-so-distant-future of 2019-2060 (space flight, relativity, etc. accounts for the time lapse), when non-governmental space flight is possible, though still uncommon.  A bit more inventive is the type of spacecraft they use – a hollowed out asteroid.  The events in the book are not told chronologically – the story jumps between the present (2060) and the past (2019) to build up suspense as to what happened on the alien planet.  Although this is clearly a work of science fiction, the story is much more focused on the relationships of the characters rather than the technicalities of space travel.  This is most clearly evident when, upon arrival to an alien planet, it becomes incredibly apparent that none of our astronauts had ever read the works of H. G. Wells.  It’s not much of a spoiler to say that things to do not end well, and the journey leaves the survivor(s) in pretty bad shape, both physically and emotionally.

The major element of this story is the characters and their relationships.  Much of the first half of the book consists of bringing the crew together and setting the stage for the sort of interpersonal drama that can only happen when you are trapped for several months inside of an asteroid traveling at light speed.  The crew consists of several Jesuit priests – Emilio Sandoz (a younger, attractive Puerto Rican who has an incredible talent and long training in learning new languages), his mentor D. W. Yarborough (compete with Texas twang), and two redshirts other priests.  It also has several non-Jesuit specialists – Anne and George (an older married couple, George was head of the program that located the original signal), Jimmy (George’s employee, who actually found the signal originally), and Sofia Mendes, the requisite MPDG (an AI specialist).  One thing I appreciated about this story was that the relationships between the characters felt rather believable, and, well, adult.  I’m a big fan of many of the YA series available, but, I have to admit it was sort of refreshing to read a story where the world didn’t have to be saved by a fifteen year old.  Granted, with this many characters the standard love triangle was bound to take shape, but at least it wasn’t the central theme of the story.  On the other hand, while I found the relationships to be believable, the characters themselves seemed a bit over-powered.  They were all super intelligent, highly skilled, and extremely pretty.  Or they at least had enough of a personality to compensate if they fell short on that last bit.  Now, granted, if you were going to send a mission to a new planet, you would want to hire the smartest and most-skilled people you could find.  But it seemed a bit odd that these hyper-intelligent, über-humans could foul things up so incredibly poorly when they reached the alien civilization.  All of their mishaps were just believable enough that you could perhaps understand how they made their mistakes, but, honestly, they were all built up a bit too much to completely believe in their epic fall.

Overall I have to say I thought this book was ok.  The story does its best to tug at your heartstrings, repeatedly, and I have to admit that I was sort of over the tugging by the time I got to the end of the book.  Not that I’m so callus as to not have felt anything, but, well, when so many bad things happen it is a bit easy to get dulled to the pain of it all.  Suffice it to say, if you are looking for a pick-me-up sort of a book, this isn’t it.  It also wasn’t the sort of a book that I felt compelled to pick up while I was reading it – I sort of had to force myself to finish it in a timely manner for the book club.  The writing itself wasn’t bad – it was actually quite good – I just wasn’t motivated by the characters or their story.  Which is a bit funny, because several months later I can still remember many of the characters quite vividly.  I don’t think my estimation of the book has grown over that time – no, I haven’t come to the sudden realized that this is the best book ever – but I do remember much of the story in more detail than I had expected I would several months down the road.  So, there is that.  In summary I would have to say that if SyFy and Oxygen got together to make a TV-miniseries special, it would probably come out something like The Sparrow.  I can’t really give a positive or negative recommendation – this book has things I enjoyed, and things I didn’t.  It is the sort of book that I think a certain audience would really enjoy, I just don’t think I’m part of that certain audience.

2 thoughts on “Book Review: The Sparrow”