Tamora Pierce is an author I have been reading since I was eleven years old.  I realize I have somewhat grown out of the target age group for her writing, but I continue to read her books anyway, because I enjoy seeing what happens in the worlds I loved so much as I was growing up.  Unlike her other works, however, Tortall and Other Lands: A Collection of Tales is not a novel length fantasy story.  It is actually a collection of her previously published and unpublished short stories. 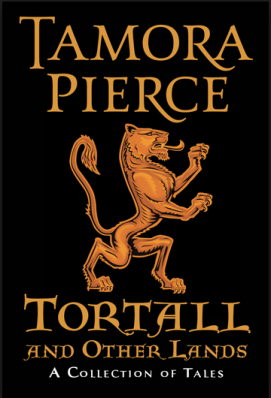 The stories collected in Tortall and Other Lands take place in many of the fantasy worlds Tamora Pierce has created, and highlight small adventures of some of her most beloved characters.  Some of the other stories take place in fantasy lands unrelated to her earlier works.  There are still others that take place in the near-present day that feature varying degrees of magic.

The stories themselves have been written and collected from various points in Pierce’s writing career.  As such some are much more engrossing than others.  I am a bit ashamed to admit that it has taken me over two years to finish this book.  While I enjoyed the stories that were related to characters I had loved in my childhood, other stories just weren’t as exciting to me.  I also felt that the stories got more powerful as the book progressed – it took me a long time to read the first few stories, but only a few days to read the last three or four.  I don’t think this reflects poorly on the book though – I think I just tend to like to read longer novels and I am not as excited by short stories.  I would read a story here and there in between longer books, but I never really felt the urge to sit down and read all of these stories back to back.

I have to say I enjoyed reading Nawat, Elder Brother, A Dragon’s Tale, and Lost as they all dealt with characters or situations that were important in her full length Tortallian novels.  I also very much enjoyed Testing, the modern-day story, because I thought it was well written, and Huntress because it felt like a bit of a departure from the other stories collected in this book.  It was more mature and I enjoyed seeing that side of her writing.  It makes me wonder what would have been if she had really pushed to create adult fantasy novels instead of those marketed to teenage girls.

In the end I am happy I finished this book – the stories at the end are definitely worth reading, even if they are uncharacteristic of Pierce’s other works.  I would definitely recommend this to fans of Tamora Pierce – this collection is a fun extension of her previous works.  I don’t know that I would recommend this to the general audience – most of the tales are cute and enjoyable, but some of them lose impact without the context of her longer novels.  I do have to say that finishing this book has made me realize that, as a reader, I really do prefer lengthy complex stories where I can be really immersed in a world.  Short story collections just don’t hold my attention because of the constant jumping between characters and settings.  Also, it seems like I have been reading a lot of stories aimed at young adults this year.  While I do appreciate the works by some of my favorite authors, it just feels like these sorts of stories aren’t as fulfilling as they used to be.  I finish them wanting more.  Which is sort of sad in a “I am growing up and losing the wonder of childhood” sort of way, but also sort of good in a “I have developed a refined appreciation of literature” sort of way.  At least it gives me a better sense of books I would want to read in the future.  I don’t know if I am ready to stop reading the works by my favorite childhood authors quite yet, but I do think I am ready to look for new authors to read and appreciate and enjoy.  And I have plenty of options on my shelves, so now I just have to figure out which one to pick…

2 thoughts on “Book Review: Tortall and Other Lands”