It is a well known fact that Robert Jordan is one of my favorite fantasy authors of all time.  So, when he listed some of his favorite authors I sat up and took notice.  At books signings he often credited John M. Ford as being his favorite contemporary author, and I have been on the search for Ford’s writings ever since.  My mother frequents used bookstores more than I do, and has had quite a bit of luck in finding some of his out of print books for me.  Unfortunately I keep getting distracted by other things, but on the trip home from nationals I was finally able to read my first John M. Ford book, The Last Hot Time. 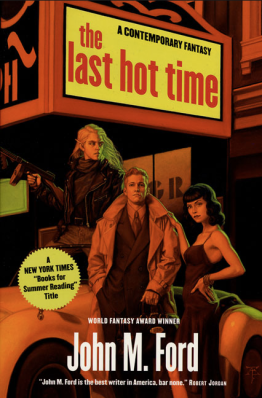 This book is a contemporary fantasy set in the outskirts of Chicago.  Danny, a young country boy, finds himself a witness to a road accident on his way to the big city.  His training as a paramedic allows him to gain favor with Mr. Patrise, one of the town’s most prominent patrons.  Ford introduces us to a large and varied cast of characters, including Cloudhunter, one of the Elves who has returned (along with the presence of magic) to this world.

Danny finds himself given a new identity (Doc Hallownight, or more commonly just Doc), and new responsibilities.  He (along with the reader) learns about the very different world that he now inhabits.  He enjoys the glamourous parties and outings sponsored by his new patron, but he also must deal with some less-than-glamorous experiences in the gang-controlled sections of town.  Danny eventually settles into his role as Doc as finds his way and his place in this new and magical world.

This is really a coming of age story, but it is handled with great subtlety and depth.  The writing assumes an audience smart enough to pick up on the subtle hints and clues left by the characters.  So much of the richness in this story comes from being able to read between the lines, and picking up on what the characters don’t say, as much as what they do.  I think this is rather fantastic because, very often, this is how people actually seem to communicate.  Despite being thrown into a world of elves, odd crimes, and strange magic, there is not much exposition to slow down the story.  In fact this story seems to start at a quick pace, and only speeds up as the story moves along.  I think one of the great things is that as much as you learn about this world, you still want to know more.  And even as details get filled in, it leaves you with yet more unanswered questions.  There is a depth and richness to the world and the characters, and despite the elves and other magical properties, they all seem to have oddities and personality quirks that make them very realistic.

My only real complaint about this story is that there doesn’t seem to be enough of it.  I want to spend more time with these characters, and I want to know more about this world.  I mean, as a whole this book is fairly satisfying – we see Danny grow as a person both personally and professionally as he accepts his new role in life as Doc Hallownight – but there is a depth to this world that I feel I really didn’t get to explore.

In the end I would recommend this book to fans of the fantasy genre, but especially those who really enjoy nuanced, detailed, and subtle writing.  Also, who can say boo to elves in leather jackets sporting machine guns?  I mean, really, it makes Legolas look like a total pansy.  I definitely think I would enjoy this book even more with a re-read, and I look forward to enjoying more of Ford’s works in the future.  This was a fun and fantastic read, and I highly recommend it to others.